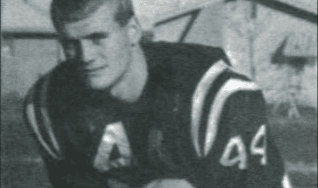 In football he was named to the Shrine Bowl, All Big 10 Conference team, All-State team and was a Parade Magazine All-American.
His senior year, Bill scored six touchdowns against Norfolk.

In track and field, Bill was a fierce competitor and won many events including low and high hurdles, long jump, high jump, discus and shot put.  Bill placed in the State track meet in the discus and long jump.  He pitched on the Legion baseball team and was recruited to play professionally.  Following his high school career Bill was awarded a scholarship to play football for the University of Nebraska.

In 1968 he was the leading scorer on the football team due to his field goals and extra points.  A herniated disc ended Bill’s college football career.