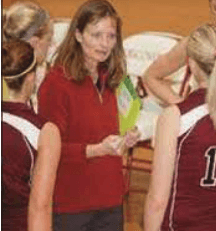 Betsy Rall was a very versatile coach in that she helped in volleyball, cross country, and track. In her seven-year stint
as head Volleyball coach, she had a 158-89 record. In the Greater Nebraska Athletic Conference Betsy had two champions and one runner-up. Her teams qualified for the state tournament four times.

At the 2004 state tournament her team was the state runner-up. As an assistant coach with the Cross Country team, Betsy helped secure top ten finishes in six of the eight years she coached. Several runners attained top ten finishes at the state meet.

As a track assistant she coached numerous athletes who qualified and/or placed in the State Track Meet.