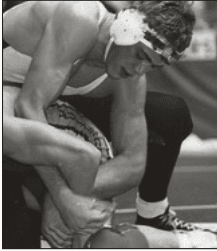 Craig Thalken loved wrestling and focused on that his entire high school career. As a freshman he was third on the depth chart on the Freshman team. He worked extremely hard and was motivated by the talks coach Charlie Sherertz gave to the team.

He was ranked third in the state his junior year but got beat out in the District meet. Even though he was sidelined with a dislocated knee injury at the start of his senior season, Craig compiled a 28-1-1 record.  Craig had over 20 pins his senior season.