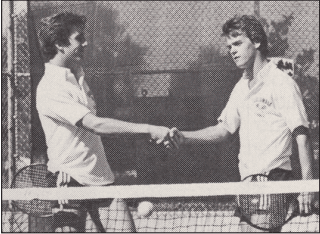 The 1982 Boys Doubles Tennis State Champions, Clarey Castner and Brad Scheidegger will be inducted this Thursday during the Discoverer Athletic Hall of Fame Banquet.  They will also be announced at Friday's CHS pep rally and will be announced at Friday night's football game against rival the Norfolk Panthers.