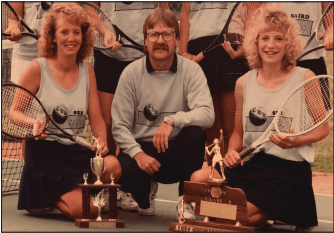 The 1989 Girls Doubles Tennis State Champions, Marie Srb Kapels and Cindy Srb Tederman will be inducted this Thursday during the Discoverer Athletic Hall of Fame Banquet.  They will also be announced at Friday's CHS pep rally and will be announced at Friday night's football game against rival the Norfolk Panthers.

Marie and Cindy were not matched together in doubles until later in the year. They were concerned that they would get into too many arguments. Coach Terry finally convinced them to play together and it worked out perfectly. They were 10-2 going into the State Tournament and seeded number one. The ladies won all four matches at State and were crowned Doubles Champions with a
14-2 record.