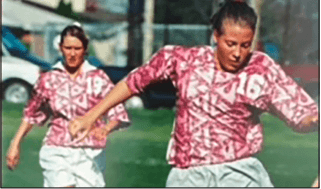 While attending Columbus High, Cathy was a three-sport letter winner.  She ran cross country, played basketball and soccer, all while maintaining a perfect 4.0 GPA and graduating first in her class.  In soccer, Cathy was voted by her CHS teammates as “All-Around Player of the Year” in 1993, 1994, and 1995.  Her senior year, Cathy was selected as Sertoma Athlete of the Year and KLIR Student-Athlete of the Year.

In basketball, Cathy was selected to the Greater Nebraska Athletic Conference All-Academic Team and led the team to Conference Champions.  As Captain of the Discoverer soccer team, Cathy was selected Nebraska Soccer Coaches Association First Team All-State and the Omaha World Herald All-Nebraska Soccer First Team her senior year.  She was Second Team All-State her junior year, and Honorable Mention All-State her sophomore year.  Cathy was chosen to play in the Nebraska Shrine Soccer Bowl in the summer of 1995.