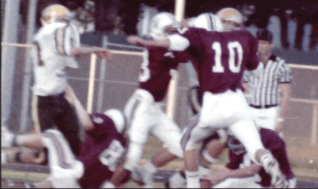 Mitch Slusarski was a three-sport athlete for Columbus High. He was named captain in football and basketball his senior year.  In football, he
was a two-year letter winner. He was the starting quarterback and kicker both years, holding several school and state records at the time. He played in the Shrine Game and was the All-State kicker his senior season.

In basketball, Mitch was on the varsity for three years and lettered two years. Columbus made it to State Basketball Tournament during the three years Mitch was on varsity.  In track, Mitch lettered three years excelling in hurdles, sprints and jumps. He was a state track qualifier in the 300 hurdles both his junior and senior year.

After high school, Mitch excelled in basketball for the South Dakota School of Mines and Technology and was inducted into their Hall of Fame. He started all four years and holds numerous school records.  He played professionally for Poland for one year.