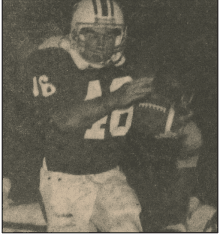 Steve was a three-year letter winner in football and track.  In track he excelled in the sprints and long jump. In his senior football season, he was on a team dubbed the “Cardiac Kids” winning both the East Big 10 and Trans Nebraska Conferences plus a berth in Class A football playoffs. Steve earned first team All-Conference and first team All-State.

Steve was also presented the Bob Murry award and selected for the Shrine bowl.  He ended his senior football season second in Class A with 1402 total yards. Steve was awarded a football scholarship to the University Nebraska at Omaha and was presented with the Outstanding Back award in 1985.